Brown deleted the tweet some 15 minutes later, but Stephanie Haberman of the social media news blog Mashable alertly took a screen shot of the comment. 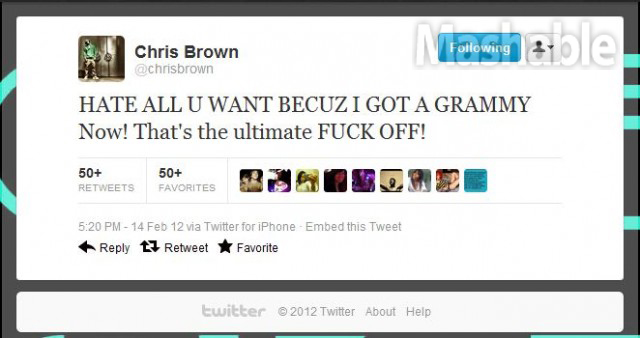 Brown won Best R&B Album for "F.A.M.E." at the Grammys, capping a three-year comeback following his assault on then-girlfriend Rihanna. Brown also performed his new single, “Turn Up the Music,” during the star-studded ceremony.

Brown's Grammy win and return to the national stage was criticized by musicians and others alike on Twitter.

"Chris Brown twice? I don’t get it. He beat on a girl,” Grammy-winning singer Miranda Lambert tweeted.

Actor Wil Wheaton of "Star Trek: The Next Generation" fame wrote: "Everyone who apparently forgot what Chris Brown did to Rihanna should read the police report on exactly what he did."