CHRIS BROWN DENIED VIP TABLE & GETS INTO A FIGHT IN CANNES! 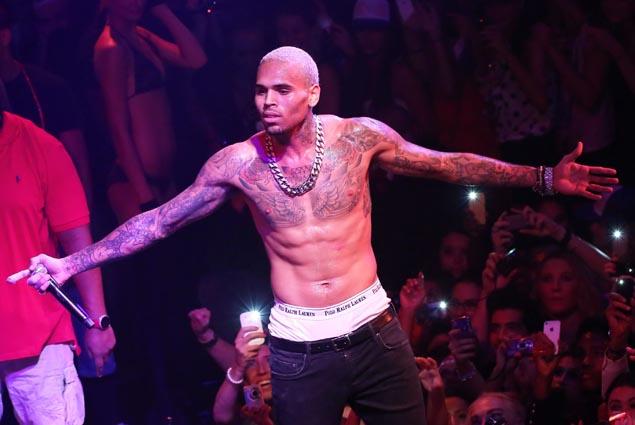 A source tells the Daily News the 23-year-old singer got into a heated argument at Gotha Nightclub in Cannes on Wednesday night with club security when he discovered his table wasn’t in the upstairs VIP area.

The eyewitness says as soon as Brown arrived at Gotha with an entourage of about 20 men and 10 women, including girlfriend Karrueche Tran , the scuffle began. The group, led by fellow musician Barry (Mijo) Bradford , walked up the stairs to the VIP area with some “huge bodyguards, and Brown right behind them, thinking that’s where their table would be,” says the insider.

Two security guards belonging to the club, however, blocked them, and Bradford became “angry and started punching and shoving the security. Then Chris and his bodyguards got involved and they were pushing and screaming at each other.”

The eyewitness in the VIP area says extra security was called in and even Paris Hilton’s private security — the heirhead was also partying at Gotha — stepped in to break up the fight. Finally, Brown and Bradford’s group was convinced to go to the table downstairs, where Brown began happily dancing on top of the couch and drinking Champagne straight from the bottle.

A Brown spokesman claims “nothing happened at the club.”

Brown sparked controversy last month when his and rapper Drake’s entourages got into a bottle-throwing brawl at W.i.P nightclub in New York City, causing the SoHo venue to temporarily shut down. The dispute allegedly involved the musicians’ mutual ex-girlfriend, Rihanna , who was not there.

In the early hours of Thursday morning at Gotha, Brown, in the South of France to film a music video with Ludacris and Swizz Beatz , performed a medley of his hits for clubgoers while shirtless. The observer said the newly blond singer looked “incredible” and “super-cut.”

How the f**k they not gonna give Chris a VIP table tho?

Guess you aint that ni**a in Cannes