Cardi B Donates $8,000 To Family Of 15-Year-Old Fatally Stabbed In The Bronx Popular rapper Cardi B has donated $8,000 to the family of a 15-year-old boy who was brutally slain in the Bronx in an attack captured on video.

Five men repeatedly stabbed Lesandro (Junior) Guzman-Feliz with machetes and knives on Wednesday night in the Bronx. Horrid video of the incident shows the attack and then Lesandro trying to run to the hospital, which was just a few blocks away. He collapsed and died before he made it.

Cardi B, who is from the Bronx, posted about the brutal slaying with the hashtag #justiceforjunior.

“These Bronx streets are ruthless,' the 25-year-old rapper said on Instagram. 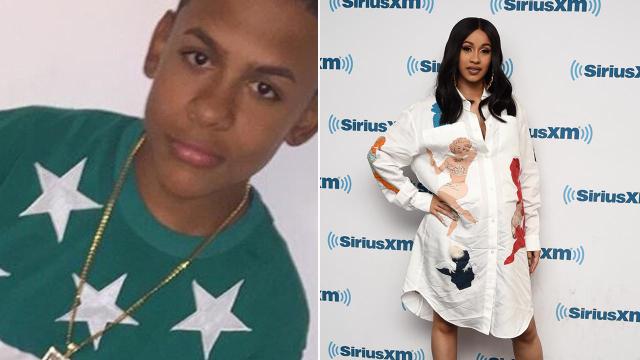 According to The Post Cops have arrested five people in the mistaken-identity slaying of a Bronx teen, police sources said Sunday.

Police took two suspects into custody in The Bronx and tracked down three more in Paterson, NJ, sources said.

Five members of the deadly Dominican gang Trinitarios allegedly hacked 15-year-old Lesandro Guzman-Feliz with knives and a machete outside a Bronx deli Wednesday night, leaving him on the sidewalk to die.

Investigators believe it was a case of mistaken identity, according to sources. The victim was enrolled in the NYPD Explorers youth program and dreamed of being an NYPD detective, according to his family.