BABY DROWNS IN A MOP BUCKET @ A QUEENS DAYCARE! 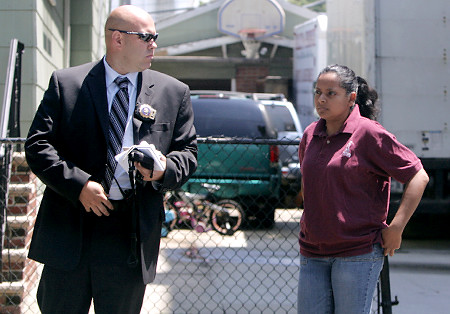 Police are investigating the death of a Queens baby who perished after he fell headfirst into a mop bucket at his baby-sitter's house.

James Farrior, who would have been a year old next month, was declared dead at Jamaica Hospital at 11:25 a.m. Monday.

"What can I say, he was my baby. We're trying to cope," said his devastated mom, Chrisann Josiah. "We don't know what happened yet."

It was not immediately clear if James drowned or broke his neck. An autopsy will be performed Tuesday.

"I saw the firefighters bring the boy out. He was gasping for air," said neighbor Billy Casares, 41. "It's heartbreaking."

Baby-sitter Kristal Khan, 28, who normally took care of two neighborhood kids along with her small son and daughter in an informal but legal daycare arrangement, was not charged.

Police sources said Khan told cops James and her two kids, aged 3 and 4, were in the living room with the bucket when she went to fetch the mop.

When she came back, she found James headfirst in the grey mop bucket that was 3/4 full of water.

Neighbor Liz Rivero, 31, a mother of three, said she began to pray when she saw a firefighter running Monday morning with the baby, limp and face up, to an ambulace waiting a block away.

"I started to cry when I saw that. I am a mom," Rivero said.

Kahn and a man neighbors said was her brother were taken away for questioning.

The operation had no permits or license, but according to state law did not require any because there were less than three outside kids and the caregiver was over 18.

Kahn's website says she is a married convent-educated immigrant from Trinidad who taught elementary school for eight years and has a teacher's certificate.

Munoz said he had checked out the operation for his own 2-year-old son, Matthew, and found it to be legal and clean.

Munoz said he ended up not taking his son there for scheduling reasons.

Because children can drown quickly and virtually silently in small amounts of water, drowning is the second-leading cause of accidental death in children, after car crashes.