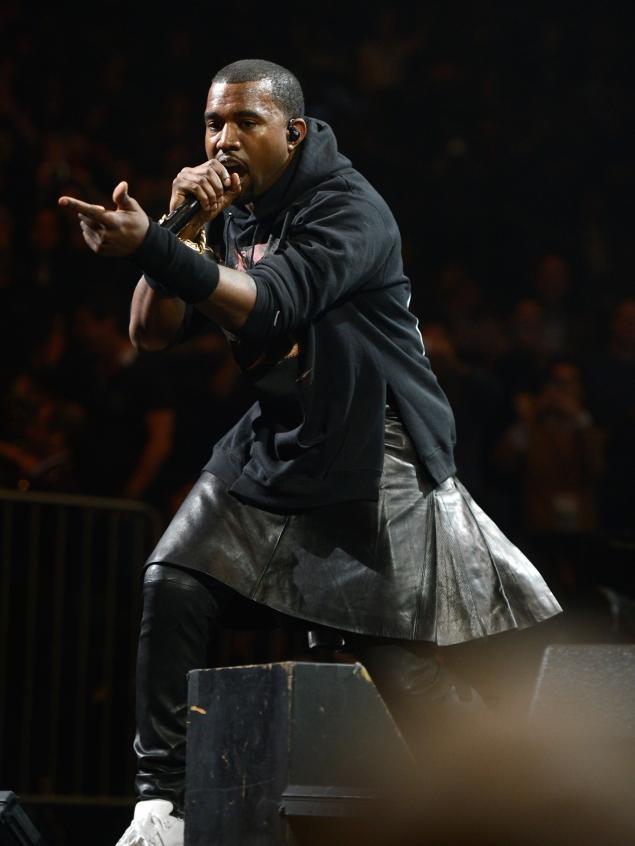 Kanye West on Co-opting the Confederate Flag, Miley Twerking, God, DONDA & His Soccer Dad Aspirations
Since Kanye West kicked off his Yeezus tour a couple weeks ago, the rapper has been making the rounds on a nationwide radio tour. Kanye has already talked a bit about his recent engagement and a lot about his current tour, all the while treating us to a mix of soundbites that show off his own self-declared genius.

In his latest sit-down with Los Angeles’ 97.1 AMP Radio (a Radio.com station) today, ‘Ye didn’t disappoint. This time around he spoke about his soccer dad aspirations, co-opting the Confederate flag and why “fashion” isn’t the right term for what he does. And that’s just a snippet of the topics he covered in the 30-minute interview.

On his lavish engagement to Kim Kardashian:
“I just thought of it. It seemed so all-American, I just love being American, you know, and I love you know, family… I feel so blessed. I feel God gave me exactly what I wanted, I have to do the right thing in God’s eyes. Just follow what God really wants me to do it will come ten fold by doing the right thing.”

On why what he does shouldn’t be considered “ranting”:
“The rant has a negative connotation. These are inspiration visionary breaks in pop culture every time I talk, a crack in the matrix. Nobody’s going to fire me tomorrow, I can say anything I want to say. Luckily I want to say positive things. I want to make my momma happy and do God’s work.”

On people’s reaction to his use of the Confederate flag in his Yeezus tour merch:
“React how you want. Any energy you got is good energy. I represented slavery, my abstract take on what I know about it, I wrote ‘New Slaves.’ So I took the Confederate flag and made it my flag. What are you going to do?”

On why said merch is selling so well (he said it’s in “the Metallica numbers, the Bieber numbers”):
“People just look cool in it. They look nice. It’s colorless. It’s super hood, but it’s super white boy approved at the same time. That’s my style. I don’t look like a rapper. When I started, I wasn’t gangster enough. I’m getting married to Kim Kardashian and I never played in the NBA.”

On Obama’s fashion sense:
“Obama? Nobody’s looking at what Obama is wearing. I’m the No. 1 inspirational person in fashion.”

On why God is his No. 1 inspiration:
“God, he made our universe. You make it that far, you have to push for a more major scale [and] nothing’s more major than what God has created”

On Miley Cyrus:
“I just met her the day of the VMAs. I was just like, ‘Go, just go. Go for it. Do what you feel.’ From the DONDA perspective, I’d want her to twerk more. I think the whole performance should have been twerking.”

On his voice being his greatest power:
“I’m not a billionaire, I may not be the most attractive… but I right now, because of ‘New Slaves,’ because of the position I’ve always taken, I have the most powerful voice by a mile — by a mile. I have a trillion dollars’ worth of voice.”

On Swiftgate, again:
“That moment at the awards show: that was inaccurate. Whether it was their plan to give [Beyonce] the award at the end, we still haven’t seen a video as good [as 'Single Ladies'], five years later.”

On why people should listen to his ideas:
“I talk to these heads, older dudes that run companies [who say], ‘I only listen to people who are younger.’ You can support me, give me a check. But I have the ideas. No one older than me has a better idea than me because I’m the only 36-year-old me. I’m the most relevant voice on the planet Earth, post being the most hated. So don’t try to tell me anything. Help me — help me help other people.”

On why he’s never going to stop expressing himself:
“It’s just look, I’m going to stand up and influence me to the fullest. It’s a certain point of frustration, waiting for everyone to agree takes too long. I’m not going to sit inside a corporation for 20 years. The time is now to express myself.”

On the benefits of his feud with Jimmy Kimmel:
“People saw the [BBC] interview who wouldn’t have seen it otherwise. Anytime people can get a dosage of this espresso, this walking confident, God-fearing creative, I think it can bring light. I’d like to direct people to the light.”

On why we’re failing:
“We have the resources to have a human utopia… but mankind is too concerned getting the next Hollywood film to Netflix.”

On why he’s not afraid to speak his mind:
“No one can say what I’m saying or they’d lose their job. I have the voice and I’m going to scream as loud as I can. Only thing to happen to me is success.”

On why “fashion” isn’t the right term for what he does:
“I want to stop using the term ‘fashion’ because Eve made Adam bite an apple and since then it’s been illegal to be naked. I’m helping people follow the law in style. This isn’t about fashion. I’m creating new standards so you don’t have to think of it. I’ll do all the hard work. I’ll figure out where that collar goes and how many times you can wash that fabric…It’s not about fashion, it’s about life. I’ll work on this, you take your kids to the park.”

On splitting his time between work and family:
“I hang out with my girl and my daughter every day. No place I’d rather be. Not even when I’m thinking about things I’m creating in business, my biggest goal is to get home to family. I want to figure out a way to do my work and be my daughter’s soccer coach. I’m going to be a soccer coach and redesign their uniforms. I’ll redesign the mini-van.”

On being fearless:
“I’m fine to make a mistake. To put an Auto-Tuned album out that no one understands. I want to open up people’s minds. I want people to think more. Feel like it’s okay to create, okay to make mistakes in front of people…I want them to feel awesome is possible.”

On Tyler, The Creator:
“Artist. Innovator. A good mentor. He helped me out with some of the [Yeezus] merch. So talented, he understands things. Went to film school, I email him, like, ‘Could you teach me how to make videos?’ Did you see his amazing Mountain Dew commercial before it was banned? It’s the best thing in the last year. You know what should be banned? Stuff that’s whack, not stuff that’s controversial. The world is controversial, classist, racist — so what. You guys are selling soda, be glad someone that creative took a moment to help you do what you do.”

On the possibility of him working with the Gap:
“What would happen if I was able to design a collection that was backed by the Gap? It would be awesome, right?”

On the future of music:
“I love the Backstreet Boys — no knock to them — but there will never be another Backstreet Boys. Artists like Lorde, singer/songwriters are going to come up.”