ANCHORMAN ACCUSED OF BEATING HIS WIFE GETS FIRED FOR NAME DROPPING! 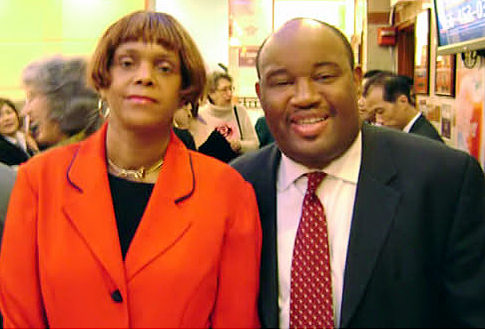 Kiss that anchorman gig goodbye.
Outraged that Dominic Carter played the "high-profile journalist" card in a desperate bid to get a judge to bury a wife-beating charge, a top honcho at New York 1 all but slammed the door shut on the fallen anchorman.

"At this point, we have no plans to bring him back," New York 1 spokesman Steve Paulus said. "He's got a lot of personal issues to work through."

Paulus said New York 1 executives had no idea Carter tried to sway the judge by citing his credentials - and claiming to be friends with big shots like Manhattan District Attorney Robert Morgenthau - until he read it in the Daily News.

"That kind of behavior violates every principle of journalism and is not something we tolerate," Paulus said.

Carter's public dressing-down came as his contract is about to expire next month, sources said.

Reached at his Rockland County home, Carter insisted he wasn't name-dropping. "I was trying to explain to the judge the sensitivity of the situation," he said.

Carter, 45, said he should have told the judge he "had to cover" the bigwigs. New York 1 put him on an "indefinite leave of absence" on Thursday.

That same day, Carter's marital turmoil became a public scandal when he appeared in a Rockland County court to face trial for allegedly pounding his wife in October 2008. He denies the charge.

Marilyn Carter, 52, told the court she lied when she claimed her husband attacked her. She blamed the beating on a day laborer whose name she couldn't recall.

Justice Arnold Etelson is expected to render a verdict sometime after Nov. 19. Dominic Carter faces up to a year in prison if convicted of third-degree assault.

A New York 1 lifer who hosted "Inside City Hall," Dominic Carter has a reputation as a newsroom hothead and reportedly had at least two shoving matches with co-workers, sources said.

Asked to comment, Paulus said "I'm not going to talk about specific incidents ...

"It's a newsroom and there have been shoving matches. We don't condone them. But when people are on deadline, sometimes tempers flare."

Meanwhile, the aunt who raised the tarnished TV newsman insisted he was no wife-beater.

"Dominic was raised by women. Why would he hurt one?" Inez Carter said. "He came up in positive environment, where women were treated well."

She said Dominic Carter was the "peacemaker" in the marriage.

"A lot of times, I feel like she provoked a lot of these disputes," she said of his wife. "He's just a big, gentle guy. He's a teddy bear."