But Saturday's sprawling Global Citizen Concert in Central Park bridged both worlds with ease. Like last year’s inaugural event, the second Global show took place on the Great Lawn before 60,000 fans. It featured the aforementioned stars, along with Stevie Wonder, Kings of Leon and Elvis Costello, as well as speakers like the crown princess of Denmark, the president of Liberia and a slew of U.S. congressmen.

They all gathered for a related cause known as the Global Poverty Project, which urges world leaders to help end extreme poverty by 2030. The concert coincided with the United Nations General Assembly meeting in the city. A wide range of outlets, from YouTube to Fuse, streamed the entire six-hour event live.

The Project had a savvy way to make sure fans did more than just enjoy the music. To score a “free” ticket to the event, attendees had to log onto the cause’s website, where they accessed content, which they then had to share with friends via social media.

The content featured information about issues ranging from education to sex trafficking to women’s rights. Fans could also make donations to various aid groups or write letters to elected leaders. This year, the amount of actions fans had to pledge in order to score a ticket increased more than twofold over last.

Some fans on hand said they found the process a snap. Alison Eder, 32, of the East Village, went to the organization’s website, completed membership and the tickets were quickly sent. “It was as easy as that,” she said.

But a 34-year-old woman who would only identify herself as Alicia said the process “seemed like a lot of trouble. We got them on eBay for $50.” 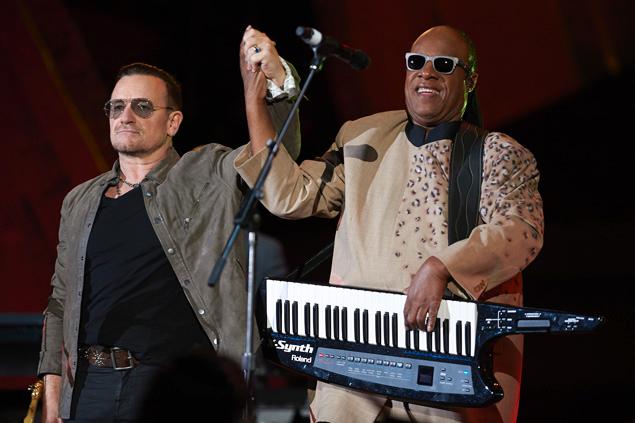 King of Leon offered the first set of the event, opening with a spiky take on their new single, “Super Soaker,” and ending with their most emotive hit, “Use Somebody.” In between, their set ranged from the punk power of “It Don’t Matter” to the Muscle Shoals funk of “Family Tree.”

Alicia Keys’ performance caught the show’s essence by stressing the connection between the personal and the political. She recast yearning neo-soul love ballads such as “If I Ain’t Got You” and “Fallin’” as universal anthems of empowerment.

John Mayer infused folk-rooted songs such as “Queen of California” and “Wildfire” with a guitar hero’s finesse. In pieces like “Slow Dancing in a Burning Room” and “Gravity,” he ignited his woodsy riffs with quicksilver leads. Mayer also offered a cover of “Going Down the Road Feelin’ Bad,” which he credited to the Grateful Dead. While that band famously covered the piece, it’s of traditional origin and has been performed by countless musicians for decades.

Elvis Costello made an impression with just one medley. He fused a new song recorded with The Roots, “Trip Wire,” with his famous cover of the Nick Lowe classic “What’s So Funny About Peace, Love and Understanding.”

Headliner Stevie Wonder offered the loosest set of the night. He vamped through his greatest hits, with humor and irreverence. For “Superstition” he brought on guests Janelle Monae and Maxwell. At one point, he shoehorned in another political cause, announcing, “We must do something about the gun laws in this country.”

To make his point he performed “Imagine,” by John Lennon, who was famously gunned down three decades ago within walking distance of the concert’s setting.

Despite that sobering note, the bulk of Wonder’s set eagerly embraced the day’s optimism. In the exuberance of “Master Blaster,” the funk of “Superstition” and the punch of “Sir Duke,” Wonder captured the spirit of overcoming anything.