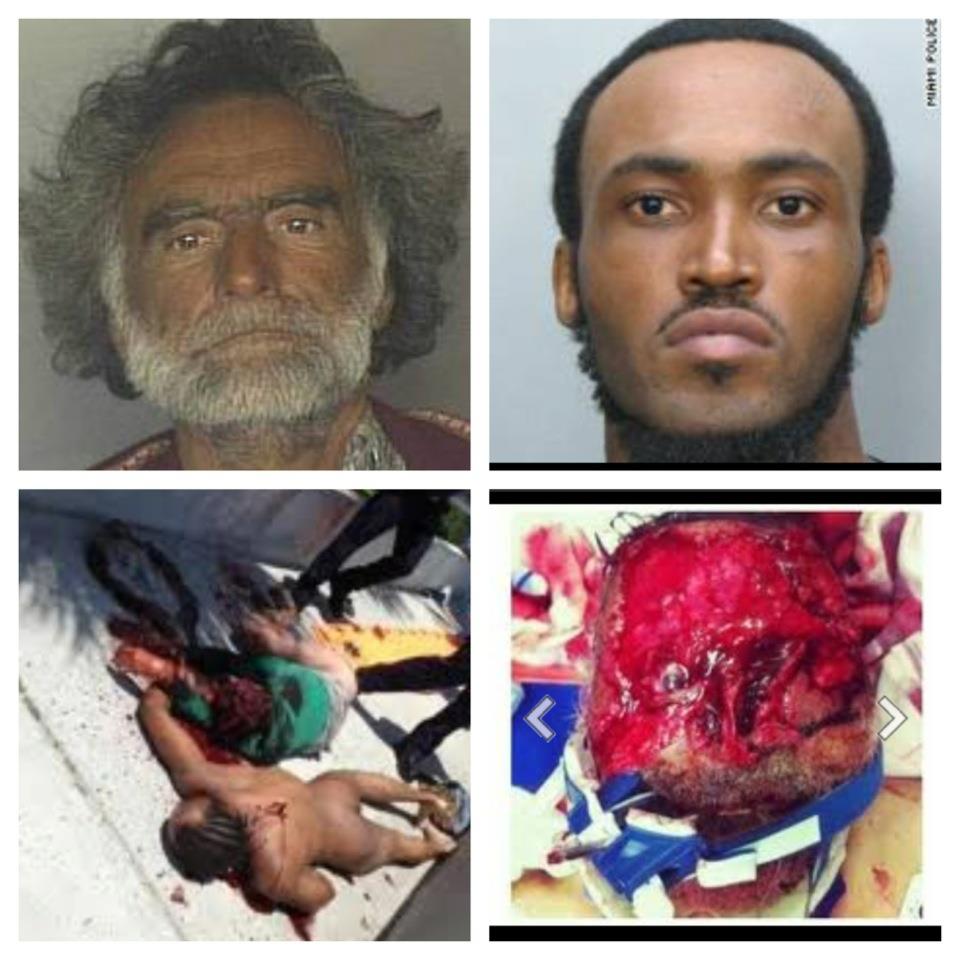 The “cannibal” attacker who chewed off another man’s face in a gruesome crime in Miami Saturday is suspected to have been under the influence of a dangerous drug sold under the innocuous name “bath salts.”

The victim of the attack, a homeless Miami man, was in critical condition Monday after 75% to 80% of his face was chewed off, CNN reports. Police said the attacker, Rudy Eugene, 31, exhibited “insane” behavior similar to other violent incidences linked to bath salts.

Eugene was shot and killed by police during the attack.

Bath salts, also known by street names like “Ivory Wave,” “Vanilla Sky,” “Bliss,” and “Purple Rain”, made headlines last year after a rush of emergency room visits, thousands of calls to poison centers and several deaths. The man-made, synthetic drug is made from amphetamine-like chemicals and causes a unique combination of effects on the brain.

“If you take the worst attributes of meth, coke, PCP, LSD and Ecstasy and put them together, that’s what we’re seeing sometimes,” Mark Ryan, the director of the Louisiana Poison Center, told the New York Times.

The powdery substance comes in a small packet, and can be inhaled, swallowed or injected, according to a report from the National Institutes of Health.

The drug is manufactured by street chemists and sold in convenience stores or online, often legally. Sellers were able to sell the drug legally since its emergence in 2009 by marketing the substance as either bath salts or “plant food” or “insect repellant,” and stipulating “not for human consumption” on the label.

Use skyrocketed throughout last year, mostly by teens and young adults, until in October the DEA banned three chemicals used to make the drug.

Several states have issued a ban on the drug but no federal ban exists.

Users experience a mix of physical and psychological symptoms. The stimulant can cause excited delirium and severe hallucinations. Users can become violent and suicidal. People often experience a super-human strength, and long-lasting euphoria or paranoia, reports say.

The health consequences, like high blood pressure and rapid heart rate, can be fatal.

Because of the nature of the symptoms the drug has been linked to many violent and crazed crimes and deaths like the recent “zombie” attack.

Last year, a man in Indiana climbed a flagpole on the side of a road and jumped into traffic. Another man in Pennsylvania broke into a monastery and stabbed a priest, and a woman in West Virginia scratched herself 'to pieces' because she thought there was something under her skin, the New York Times reported.

Nudity is common because the drug causes body temperature to rise so fast and so high people feel like they're burning up and take off their clothes, reported the Daily Beast.

The powerful stimulant can cause super strength and in many cases hospital officials or police say it takes several people to hold down a user, the Times reported. The person often won’t respond to a stun gun or taser, the paper said.

The U.S. Drug Enforcement Agency has classified bath salts as a Schedule 1 drug, labeling it as highly addictive and illegal. The agency banned mephedrone, MDPV and methoyne, the common ingredients in the drug.

The ban is in place for a year while the DEA studies whether it should be made permanently illegal.

However, banning synthetic drugs if often ineffective, experts say. Bath salts are a designer drug, meaning the chemical concoction can be tweaked slightly and classified as a new drug, making it easy to skirt around the law.

Bath Salts? And here I was thinking that sh!t was Sherm

Ni**a do you see his face? That sh!t don't exist anymore!