WTF! FIX-A-FLAT BUTT INJECTION TRANNY INJECTED A WOMAN IN HER FACE TOO! Narinesingh, who was born a man, told the station that she was desperate to have plastic surgery and contacted Morris about two years ago after hearing about her through "word of mouth" in the transgender community.

"It becomes so dire that you want to match your outside with your inside that you're willing to roll the dice and take your chances," Narinesingh told CBS.

"As a transgender person, you're thinking 'Oh, my God, I can start to look like I want to look like and I don't have to spend a lot of money.'"

"She's got a long road, thousands and thousands of dollars to correct what was probably two or three hundred dollars to get the injection," Martin told CBS.

Morris was arrested earlier this month by police investigating a botched butt implant that landed a woman in a Tampa hospital in May 2010.

That procedure reportedly involved shooting a mix of cement, glue, mineral oil, and tire sealant into the woman’s buttocks.

Morris was released from Miami county jail on Monday night after paying a $15,000. She refused to comment on the case, saying only "I have a lawyer."

She faces charges of practicing cosmetic surgery without a license. 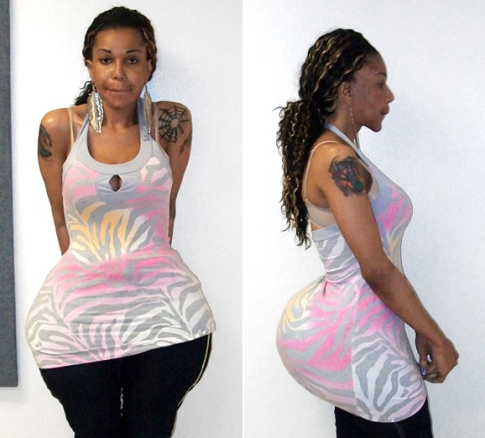 A transgender woman in South Florida faces charges of practicing cosmetic surgery without a license, after police say she injected an unwitting patient’s buttocks with a handful of unsafe substances, including tire mender Fix-A-Flat, NBC reported.

The botched butt implant sent the unidentified woman to the hospital, and landed Oneal Ron Morris, who is legally identified as a man, in cuffs.

Miami Gardens Police arrested Morris, 30, on Friday, following an investigation by the Florida Department of Health.

Sgt. William Bamford said the illegal procedure took place in May 2010, after the woman and Morris met to discuss details, according to ABC.

“They agreed on the price of $700 for the procedure, which was intended for cosmetic purposes,” he said.

The injection took place in a residential setting, where Morris shot a mix of cement, glue, mineral oil and tire sealant into the woman’s buttocks, ABC reported.

The woman rushed to Tampa General Hospital, where she was treated for infection and pneumonia, but would not divulge Morris’ name, according to the report.

Hospital officials contacted the Dept. of Health, but it took investigators months to track down Morris.

Police suspect there are other victims, and urge them to come forward.