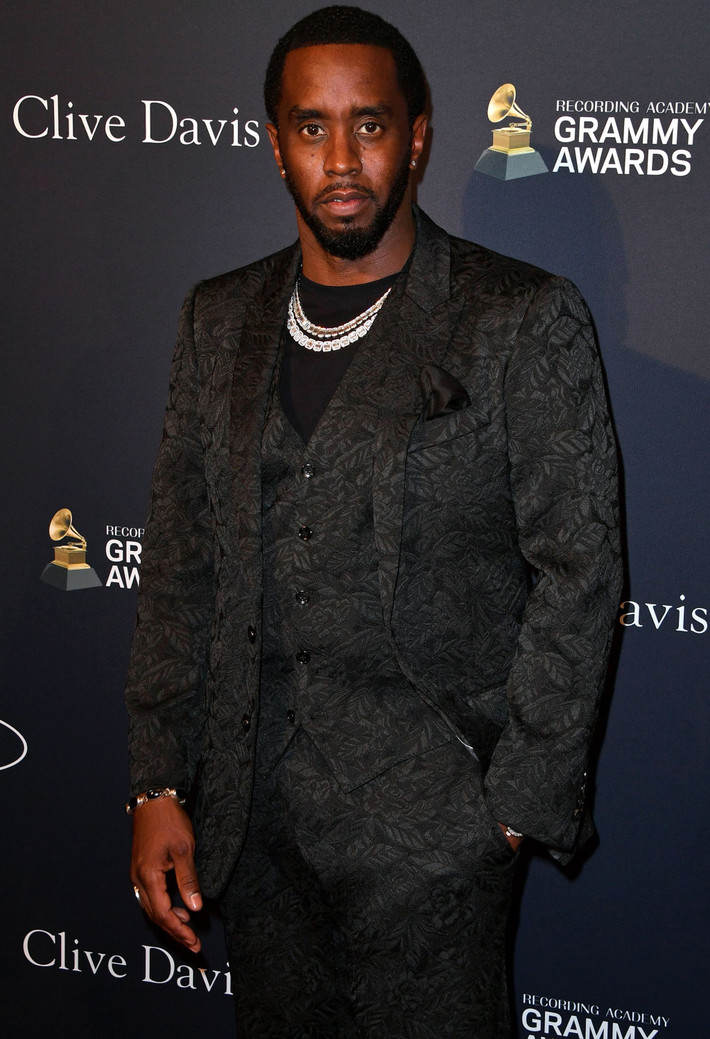 Davis’ starry party largely avoided the behind-the-scenes scandal that rocked the Grammys last week with the exception of Davis describing it as a “very tumultuous time for the academy.” But Diddy, who was honored with the icon award at the gala, wrapped up his nearly hour-long speech with a call to action for the old guard.

“I have to be honest. The last few days I’ve been conflicted. I’m being honored by this industry I love, this family that I love, but there’s an elephant in the room and it’s not just about the Grammys,” he said. “This is discrimination and injustice everywhere at an all-time high. But there’s something I need to say to the Grammys and I changed my middle name to love, so it’s Sean Love Combs now… I say this with love to the Grammys because you really need to know this. Every year, y’all be killing us man. I’m talking about the pain. I’m speaking for all the artists here, producers and executives – the amount of time to make these records, to pour your heart out into it… in the great words of Erykah Badu, ‘We are artists and we’re sensitive about our s–t. We are passionate.’”

Diddy took it a step further and specifically talked about how the awards show shuns black artists.

“For most of us, this is all we’ve got. It’s our only hope. Truth be told hip hop has never been respected by the Grammys. Black music has never been respected by the Grammys to the point that it should be. So, right now, in this current situation, it’s not a revelation. This thing been going on and it’s not just going on in music. It’s going on in film. It’s going on in sports, It’s going on around the world. And for years, we’ve allowed institutions, that have never had our best interest at heart, to judge us. And that stops right now. Y’all got 365 days to get this s–t together… We need the artists to take back control. We need transparency. We need diversity. This is the room that has the power to make the change. It needs to be made. They have to make the changes for us. They’re a nonprofit organization that’s supposed to protect the welfare of the musical community. That’s what it says on the mission statement. That’s the truth. They work for us,” he said.

Diddy closed the speech, acknowledging iconic albums from black artists the academy ignored in the past.

“My goal used to be about making hit records, but now it’s about assuring that the culture moves forward, my culture. Our culture. The black future,” he said. “And for me to be worthy of receiving an icon award, I have to use my experience to help make a change. And on that note… y’all got 365 days. And I want to dedicate this award to Michael Jackson for ‘Off the Wall,’ Prince for ‘1999,’ Beyoncé for ‘Lemonade,’ Missy Elliott for ‘Da Real World,’ Snoop Dogg for ‘Doggy Style,’ Kanye West for ‘Graduation’ and Nas for ‘Illmatic.’”

Diddy received a standing ovation from the artists in the room including Jay-Z and Beyoncé, who sat front and center applauding him. “Beyoncé, I call her King Beyoncé. Everybody all know that’s like my superhero right there. When, I watch her and she goes and I think I’m working hardy? Nah, nah. She pushes me and she’s been a sister to me, and I thank you,” Diddy said during the speech.

The music mogul was honored by his Bad Boy Records family, including Faith Evans, Lil Kim, Carl Thomas and his son, Christian. At one point, his crew even chanted, “Bad Boy.” When Diddy took the stage, partygoers were so taken aback by how long he spoke, one person even pleaded, “Diddy release us,” to their table. But to Diddy’s credit, he gave the room a fair warning.

“Right now, I’m truly present, and it feels like a dream. I’m going to be up here for a second because, also, I follow in the footsteps of Clive Davis. So, everyone can sit down and relax. I don’t want your feet to hurt, but it’s a lot of people to thank. But, this dream has become a reality, so. I’m going to take my motherf–king time,” he said.

Little did everyone know, he would take 50 minutes. Meanwhile, surprise honoree, Janet Jackson got a raw deal. She was honored at the end of the night by Cynthia Erivo, who performed the singer’s hits “Together Again” and “Love Will Never Do,” but half of the room including Beyoncé, Jay-Z, Usher, and Lil Kim had already left.

“I know everyone, it’s late, everyone is ready to go to bed. It’s been a while since I’ve seen all of you. When I was getting dressed this evening, I thought about it, and I said to myself, ‘I’ve been in this industry for 47 years.’ That’s a long time and I still enjoy going to work and I feel very blessed to still have my journey ahead of me,” she said.

“It was mobbed outside. I’m surprised it wasn’t shut down. People were literally outside for an hour trying to make their way up to his place,” a partygoer told Page Six.

At one point in the evening, Diddy closed the door to his living room where he hung out with only the A-listers.

“He then grabbed the mic and told everyone to come to the dance floor. Everyone was by the pool dancing and then Chance the Rapper lead everyone in the electric slide at the end of the night. It was the dopest moment,” the source said. A food truck serving chicken and waffles fed everyone.