WTF! CHRIS BROWN SAYS HE FEELS LIKE JESUS AFTER THE FRANK OCEAN FIGHT! 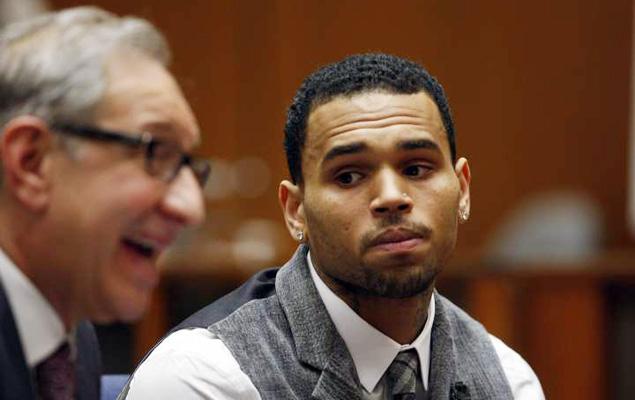 Maybe he should call himself Christ Brown.

One day after being accused of landing a punch in a fight with rival singer Frank Ocean, rage-prone R&B star Chris Brown posted an Instagram photo of Jesus on the cross with the caption, “The way I feel today.”

“Focus on what matters!" he added.

Brown, 23, who remains under probation for beating up on-again, off-again flame Rihanna in 2009, is under investigation for the fight over a parking space at a recording studio in West Hollywood Sunday night, cops said.

Brown was even photographed Tuesday with a new hard white cast on his "punching hand," the celebrity website TMZ.com reported.

Still, some Brown supporters rushed to his defense.

"People, please make sure you're perfect before you attempt to judge this young man," Jamie Shay, a fan, wrote on the Instagram page.

"I remember all the times Jesus hit women and started fights over parking spaces. Truly a fitting comparison," he posted.

Brown was one of six men involved in the brawl at the Westlake Studio around 8 p.m., authorities said.

According to TMZ, Brown became upset when Ocean refused to shake his hand after the two verbally jousted over parking lot protocol.

"Got jumped by chris and a couple guys. lol. I only wish everest was there," Ocean later wrote on Twitter, referring to his Bernese Mountain Dog.

Brown had left by the time cops arrived but is willing to speak with investigators, a law enforcement source told The News.

Brown's lawyer Mark Geragos did not immediately respond to a request for comment.

The two singers have been virtually feuding on and off for years.

The quarrel started in 2011 when Brown described Ocean as a successor to at least one R&B singer-songwriter who wrote for him in the past: James Fauntleroy II.

"I f--- with Frank Ocean! Reminds me of a young James Fauntleroy or Kevin (Cossom)," Brown tweeted.

Ocean took offense and responded by saying Brown reminded him of a young Ike Turner, the singer famous for beating his wife, Tina Turner.

"F--- odd future! Make sure y'all smalltime n----s stick yo chess out when u speak to me," Brown shot back.

Tensions seemed to subside when Brown offered support for Ocean when he came out last year. "My Opinion on the whole Frank Ocean subject is... love who u wanna love," Brown tweeted. "It's ur decision. People stop searching for BS."

The Sunday night incident wasn't the first time Brown found himself at the center of a fight investigation.

Last June, Brown was injured in a brawl with members of hip-hop star Drake's entourage at a New York nightclub.

That fight allegedly erupted over comments made about Rihanna, whom Brown battered in 2009.

Meanwhile, Brown and Rihanna have reportedly rekindled their romance, appearing in public together and tweeting intimate photos in recent weeks.

Brown also released a new song Monday that sparked controversy due to a pugilistic-sounding lyric about women and a "roundhouse."

The new song with protégé Luvaboy TJ includes Brown singing: "Two girls on my couch // And I beat a pu--- up, roundhouse."

Song producer Darnee Washington, who goes by the name Unique Weirdo, confirmed the lyric in the song, "Jumping Out The Plane," but told The News it was "metaphoric" for "sexxin" up a lady.

Somebody tell this ni**a Chris