THE NYPD RACIALLY PROFILES & ILLEGALLY USE STOP & FRISK TACTICS IN THE BRONX EVERYDAY! BUT IT'S FUNNY WHEN THEY DO IT TO A BLACK SERGEANT! 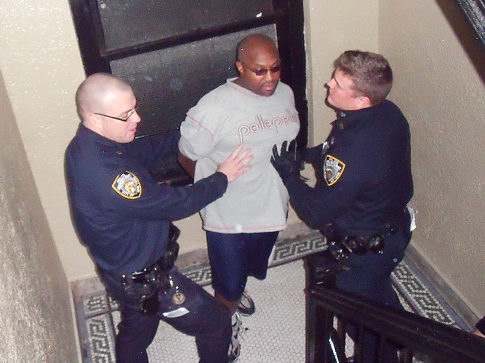 A black off-duty NYPD sergeant carrying takeout food to his girlfriend's apartment claims he was racially profiled and roughed up by aggressive cops in the Bronx.
Sgt. Reginald McReynolds says he was handcuffed for 20 minutes while threatened by a rookie cop with arrest and the loss of his pension.

"I was minding my business," McReynolds told the Daily News. "I can think of no other reason for being stopped but my skin color."

"This incident has opened my eyes," added McReynolds, who's assigned to the Quality Assurance Division, which audits crime statistics.

The Oct. 26 confrontation occurred as Officers Kyle Bach and Joseph Azevedo of the 52nd Precinct were handling a domestic dispute call in the building, official records say.

As McReynolds walked up the stairs with two bags of Chinese food, he says Bach "came right up in my face and said, 'What f------ apartment are you going to?'"

McReynolds pointed to his girlfriend's door and, he said, Bach then threatened to arrest him for criminal trespass.

"He took out his penlight and shined it right in my eyes blinding me," McReynolds said. "I let him know I'm on the job and was looking for my wallet and he struck me in the neck with his [baton]."

Official reports say the cops claim they stopped McReynolds because they thought he might be the boyfriend of the woman in the domestic case.

McReynolds is 42 years old and weighs 275 pounds. He says the woman's boyfriend is also black, but is in his late 20s and weighs about 150 pounds.

"There's no way in the world I fit the description of that guy," he said.

In his 19-year career, McReynolds has never received a command discipline or civilian complaint. Now he's been slapped with charges accusing him of stonewalling the cops, pushing Azevedo and telling his girlfriend to say he was assaulted.

"The cops' story is an afterthought to justify their unconstitutional stop," said the sergeant's lawyer, Eric Sanders, of the Law Firm of Jeffrey Goldberg in Lake Success, L.I.

A police spokesman did not respond to a request for comment.