THE DROID! DROPS NEXT WEEK! 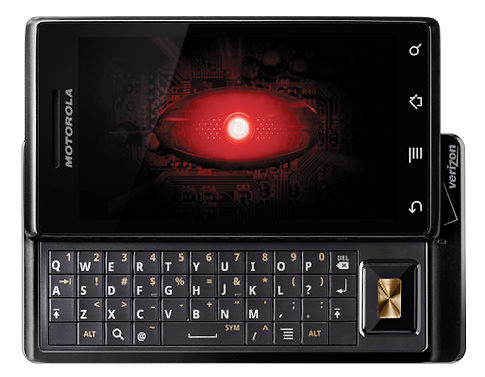 Verizon Wireless' answer to the iPhone - the Droid - will go on sale next week for $200.
Verizon revealed details Wednesday after intensely advertising the device in recent weeks. Verizon has been pointing out the features Apple's phone lacks, such as a physical keyboard and the ability to run several applications at once.

At a launch event in New York, Verizon said it was embarking on its largest marketing campaign ever and would target 15- to 35-year-olds who are highly engaged with their gadgets for social networking, blogging and other online tasks.

The phone, made by Motorola Inc., will go on sale for $199.99 after a rebate and will require a two-year contract. Verizon Wireless is the Droid's exclusive U.S. distributor and will sell them in its stores and Web site beginning Nov. 6.

The Droid won't be first challenger for the iPhone, which is available in the U.S. only to subscribers of AT&T Inc. Sprint Nextel Corp. has been pushing the Samsung Instinct and Palm Inc.'s Pre. Verizon also has been selling the touch-screen BlackBerry Storm, but it hasn't been a huge hit.

With the Droid, Verizon is tapping into the frustrations some users have with the iPhone. AT&T has run into capacity constraints given the popularity of the device for high-bandwidth tasks, and Apple's requirement that it approve all applications running on it ahead of time has led to complaints from some consumers and developers.

The Droid is the latest Motorola phone to use Google Inc.'s Android operating system, which is an open platform that anyone can customize. Motorola considers that flexibility to be key to its turnaround. The Schaumburg, Ill.-based phone maker hasn't produced a hit since the wildly popular Razr phone in 2005.

Google is throwing its weight behind the Droid, too. The Internet search leader is using the device to introduce a mapping application that may provide the Droid with brief marketing advantage over other smart phones and pose a new threat to GPS gadgets like the ones by Garmin Ltd. and TomTom.

The new mapping program calls out turn-by-turn directions while providing a variety of visual guides, including satellite imagery and high-resolution photos of the streets being traveled in places where they are available. Destinations can be found through voice commands or simply typing in an address.

The free application, called Google Maps Navigation, will only work on devices running on Android 2.0 - an exclusive distinction for now. But Google plans to make it compatible with other systems and devices, including the iPhone and the Blackberry from Research in Motion Ltd.