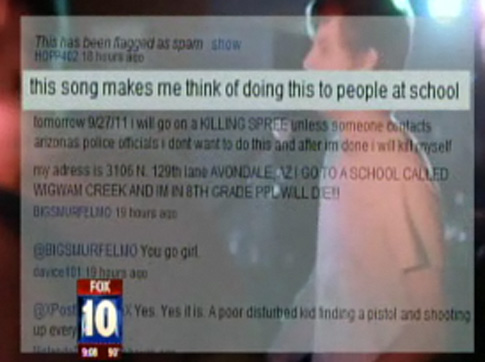 Arizona cops have arrested a troubled teen who, on YouTube, threatened to shoot up his former school and kill himself.

In comments posted beneath a video by indie rockers Foster the People, the 14-year-old said he was going to go on "a killing spree" at Phoenix's Wigwam Creek Middle School.

Maricopa County police found a sawed-off shotgun at the teen's north Phoenix home when they arrested him Tuesday at his grandfather's home, where he lived. Investigators said they weren't sure who the gun belonged to.

"He gave out a specific place and time for when it would happen," sheriff's spokesman Sergeant Jessie Spurgin said. "That made it a little more credible in our eyes."

Spurgin said the boy admitted to making the threats. He was not identified because of his age.

The lyrics of the song in the video, "Pumped up Kicks," reference teen-on-teen violence over an electro-pop melody.

"All the other kids with the pumped up kicks you'd better run, better run, outrun my gun," frontman Mark Foster sings in the chorus.

It also mentions a boy nabbing "a six shooter gun" from his dad's closet.

Mark Foster has said in previous interviews that the song is about the tortured thoughts of a bullied teen, but doesn't preach violence.

Phoenix school officials said the boy wasn't a problem when he attended Wigwam Creek in 2010 and 2011.