Snoop Dogg Finally Gets His Pic With Oprah 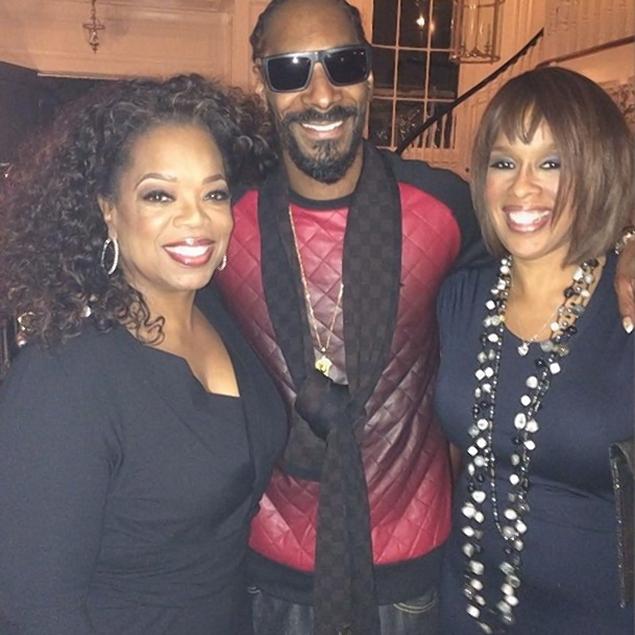 Oprah Winfrey and Snoop Dogg's past feud is history.
Approximately seven years since the media mogul pegged the rapper as being the driving force behind misogyny in hip-hop, the duo have buried the hatchet. The D-O-double G posted an Instagram photo with Winfrey and her bestie Gayle King on Saturday from an Oscars party they attended Friday in Los Angeles.

"Black history," Snoop captioned the pic.
It was 2007, when Winfrey's daytime talk show was still hot, that the host spoke out candidly about her ill impression of rap music and its misogynistic undertones. Among the rapping culprits, Winfrey named Snoop Dogg.

"I don't like her no more," he reportedly responded at the time. "I really was offended, because I kind of like her. Liked her."
The "Drop It Like It's Hot" rapper defended himself by saying, "I'm very articulate, very intellectual. She didn't even get a chance to even know me."

Now it seems like Friday night's shindig was the opportune time for Winfrey to get to know Snoop Dogg, or Snoop Lion, as he's recently been called.
But the 60-year-old OWN Network founder wasn't the only celeb the Long Beach, Calif., rapper rubbed elbows with.
He also posted Instagram pics with NBA player Steve Nash, rapper-turned-actor Kid Cudi, tennis pro Venus Williams and actor Matt Damon.

You see his french tips?