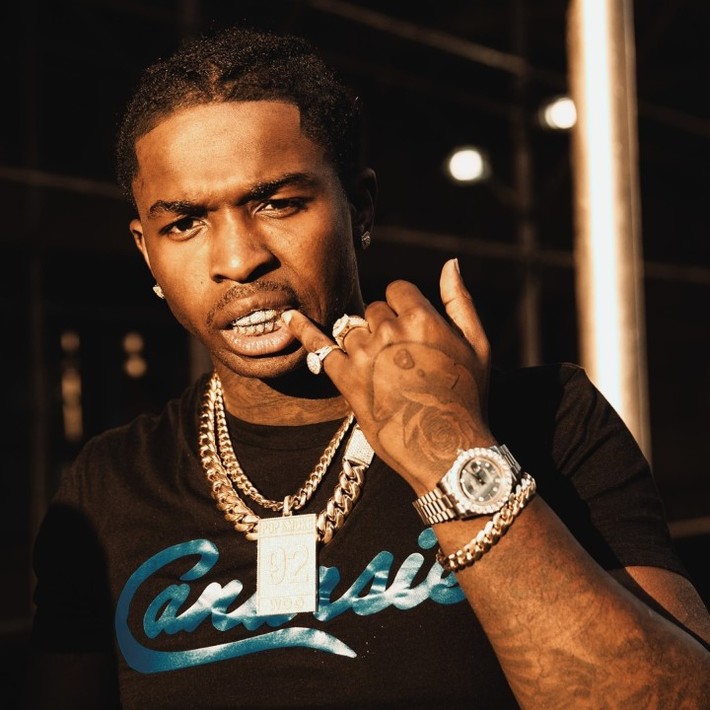 Pop Smoke was emerging last summer as one of the hottest young rappers from Brooklyn, scoring collaborations with artists like Travis Scott and Nicki Minaj.

Then, on Friday, hours before he was scheduled to perform at a concert in New York, he was arrested at Kennedy International Airport. He had just returned to New York from Paris Fashion Week.

In an odd plot twist to the meteoric rise of his music career, Pop Smoke, 20, is accused of stealing a black 2019 Rolls-Royce that he had borrowed for a music video in California, according to an indictment and a law enforcement official.

Investigators believe he arranged for the Rolls-Royce to be transported to New York City on the back of a flatbed truck, and then posted a photo on Instagram showing him in front of the stolen car, the official said. (The image has since been taken down from Instagram, but is still visible on Facebook.)

Pop Smoke, whose real name is Bashar Jackson, was charged with a crime rarely seen in a federal indictment: interstate transportation of a stolen vehicle. Pop Smoke pleaded not guilty to the single count on Friday.

The car is worth an estimated $375,000 and has since been returned to the owner, the law enforcement official said.

Last month, investigators found the Rolls-Royce parked outside the home of Pop Smoke’s mother in the Canarsie area of Brooklyn, the official said, who spoke on the condition of anonymity to discuss a continuing investigation. The license plate had been changed and the windows had been tinted.

At a court hearing Friday, a federal prosecutor said the government believed that Pop Smoke was a member of a street gang affiliated with the Crips. The indictment does not accuse him of committing any violence.

The prosecutor, Gillian Kassner, said the rapper used at least six aliases and posed a risk of fleeing the country — “not to mention,” she said, “the alias he most commonly uses actually refers to leaving,” a nod to his stage name, Pop Smoke.

Pop Smoke responded softly to the judge’s questions, wearing a white hoodie with Mona Lisa’s face on the front and striped green velour sweatpants. He was released on a $250,000 bond and is prohibited from traveling outside the United States without the government’s permission.

He is also barred from any contact with gang members or with the owner of the Rolls-Royce.

Mark I. Cohen, a lawyer for Pop Smoke, declined to comment after the hearing.

With radio staples like “Welcome to the Party” and “Dior,” the gravel-voiced Pop Smoke became one of the most promising rappers from Brooklyn’s growing drill rap scene last year. His debut EP, “Meet the Woo,” was released last July.

In October, Pop Smoke was one of five New York rappers that the New York Police Department prevented from performing at the Rolling Loud hip-hop festival in Queens, contending that they had been “affiliated with recent acts of violence citywide” but not specifying any criminal behavior.

A month later, he met the owner of the new Rolls-Royce at a recording studio in Los Angeles. The owner, whose identity was not revealed in the indictment, let the rapper borrow his car for a music video on the promise that it would be returned the day after, according to the law enforcement official.

When that day came, the official said, the owner was unable to reach Pop Smoke and tried figuring out the Rolls-Royce’s location using the GPS tracking on the car. He saw that his Rolls-Royce was traveling through Arizona.

Days later, the official said, Pop Smoke posted the photo on Instagram with the Rolls-Royce in New York. Investigators eventually gathered evidence that indicated Pop Smoke had arranged for the car to be transported across the country on a truck.

This was not Pop Smoke’s first run-in with law enforcement. About a year ago, he completed a diversion program set up by local prosecutors in Brooklyn for first-time offenders, according to a person familiar with the case. The program’s participants are typically young people who face gun possession charges.

In an interview with The New York Times last year, Pop Smoke said he was kicked out of eighth grade for bringing a gun to school.

He said of his teenage years: “You like nice things, you got to do things to get nice things.”

Pop Smoke had been scheduled to perform Friday night at the Barclays Center arena in Brooklyn at an annual tribute concert called Yams Day, which is expected to feature ASAP Rocky and other rappers.