NIKE INTRODUCES A SNEAKER FOR EVERY NEW YORK CITY BOROUGH! 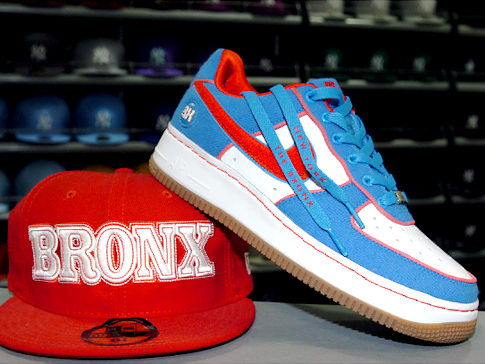 It's Christmas in July for sneaker freaks who want to wear their neighborhood pride on their feet.
Limited-edition Nikes - each paying homage to a different borough - go on sale tomorrow, and retailers are expecting a mob scene.

"We're one of the stores that has the Bronx shoe," said Vinny Cafaro, who owns BX Sports on Pelham Parkway.

"We haven't seen demand like this for years. ... We get calls all day long."

Color combinations will be different for each borough. The scheme for Queens is green, gold and white, while Brooklyn is black, plum and white.

Each pair has a borough logo and identifying laces.

"The laces are sick!" said Chukwudi Maduakolam, 20, of East Harlem. "I'm from Manhattan, but being a pseudo sneaker collector, I think I might get them all."

That'll cost a pretty penny. The shoes sell for $135 a pair.

The Nike store on Mercer St. in SoHo will sell the entire line, but other stores will only get the sneaker for their borough.

"We're lucky to have them in our store," said Amit Chodha, owner of Moe's Sneaker Spot in Jamaica, which is getting the Queens version.

"Not a lot of stores are getting them - just a few stores in every borough."

They can also be bought online at nikestore.com, though bloggers expect them to sell out fast. Nike refused to say how many pairs will be shipped.

Though Nike has released other borough-centric shoes in the past, these low-tops are designed to promote the inaugural World Basketball Festival, a city hoops extravaganza planned Aug. 12 through 15.

The festival will fast-break from Times Square to Harlem's legendary Rucker Park and Madison Square Garden.