LOL! WE GOT ORANGUTANS USING iPAD'S TO SKYPE! 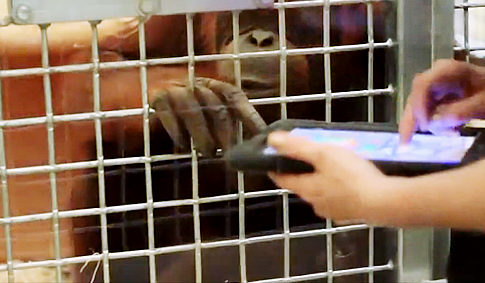 "Monkey see, monkey do" has taken on a new meaning for several clever orangutans at the Milwaukee Zoo.

That's because these lucky primates have become the first of their kind to communicate with one another - cage to cage and zoo to zoo - on iPads via online chat service Skype.

"Orangutans can communicate via sounds, squeaks and squeals," said Richard Zimmerman, founding director of Orangutan Outreach. "They make all sorts of noises and they communicate with their eyes. They roll their eyes at each other. They glare at each other. It's ingenious."

At the moment, zoos in Phoenix, Atlanta and Toronto are signed on to hold weekly sessions for their furry friends, with hopes of eventually giving them a platform to communicate inter-zoo.

Sounds like "Planet of the Apes" isn't too far off base or too far in the future.

Though other animals have been privvy to the coveted Apple product before - dolphins are being taught to communicate with humans - primates with iPads open up an entire realm of possibilities, including enrichment exercises and artistic abilities.

"As long as the orangutans are the decision-makers, the enrichment can be great for them," Zimmerman said. "And if zoo visitors can see this in practice and then go home with a better appreciation for the orangutans as sentient, intelligent beings who need to be protected in the wild, then everybody wins!"

The plucky primates have even found their favorite apps, which include fingerpainting app DrawFree; interactive book "The Fantastic Flying Books of Morris Lessmore; and games like Flick Kick Football.

The biggest obstacle thus far, however, has been allowing the orangutans to hold the iPads themselves, because "an orangutan can snap an iPad like you or I could rip cardboard."

"We know orangutans love doing something tactile, and they are naturally very curious and inquisitive," Zimmerman noted. "Putting orangutans with a touch screen, there's a grace to it. It's phenomenal to watch."

"A friend of a friend who is a gorilla keeper at the zoo was half-joking about getting an iPad to use with gorillas after seeing a story in the UK Sun," he said.

And "Why not?" Engel thought.

After holding an iPad 2 up to glass of the orangutan's habitat and letting the orangutan look at himself in the iPad screen, Engel's mind began to race with the possibilities.

The rest is history in the making.

"The super amazing thing about the whole experience is that they don't get any reward for this - no food or treats, they just get to play," Engel said. "They chose to greet me and let me hang out with them. That is the best thing about it.

"They get to decide something. I'm just along for the ride."