KID CUDI ON THE COVER OF COMPLEX

This being his fourth Complex cover—and his first digital one—most readers should be familiar with Cudi’s story by now. From his career’s humble beginnings to the pressures of newfound fame, the ups and downs with drugs, the newfound thrill of fatherhood, and the fall-outs with rappers he didn’t fuck with musically—all have been well documented in these pages. Indeed, Cudi first referred to himself as one of the “wizards” of the rap game in a 2010 Complex cover story. Now he’s just released a new album called WZRD with his old friend Dot Da Genius, the same guy who produced Cudi’s breakthrough hit, “Day ’N’ Nite.” After 8 hours of shooting together on a set reminiscent of the infamous “What’s in the box?” scene from Se7en, both Cudi and Dot seem exceptionally happy.

As much as things have changed since the duo started making music together six years ago, much has stayed the same. WZRD was no big-budget studio affair—they recorded most of the album on the road in a tour bus, or in Cudi’s basement studio in the Hills. Guerrilla style is the same way these two first started making music back in Dot’s parents’ Brooklyn apartment. Just as the pair vibed off each other to develop their own unique sound during Cudi’s demo days, over the past two years they’ve figured out how to craft a brand new alt-rock hybrid. Expanding on their hip-hop roots, they taught themselves to play guitar and bass, studied everyone from Pink Floyd and The Pixies to Nirvana and Lead Belly, and created their own type of rock album. WZRD falls in line with “Day ’N’ NIght”—the Grammy-nominated smash that catapulted the duo’s career—only in the sense that it’s different than anything rap has ever heard. 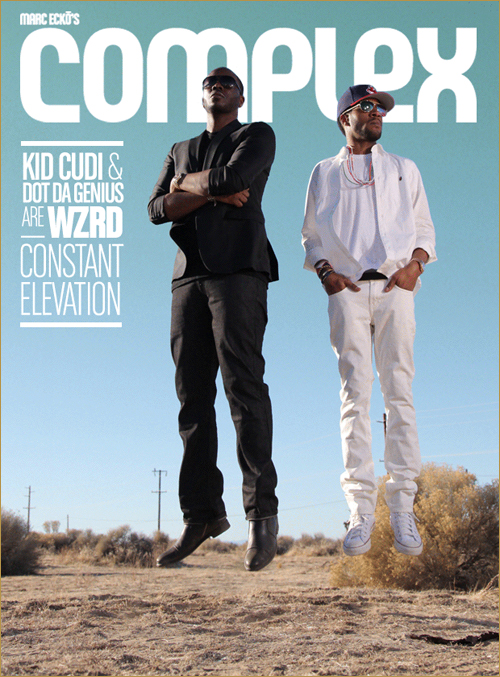 Expanding on their hip-hop roots, they taught themselves to play guitar and bass, studied everyone from Pink Floyd and The Pixies to Nirvana and Lead Belly, and created their own type of rock album.

The musical dynamic may be similar, but Cudi’s spot in the Hollywood Hills is a world away from the East New York apartment where Dot’s parents welcomed him when his back was against the wall. With no place to live, Cudi was ready to pack up and head back to Cleveland, but Dot’s strict Nigerian parents took him in and gave him a home. Recognizing the two kids’ work ethic, musical talent and creative chemistry, Dot’s mother and father wanted Dot and Cudi’s work to continue—allowing them to live and work together like brothers. Six years later they’re still taking risks, still facing their fears and pushing the envelope. And it’s all paying off for the man born Oladipo [aka “O Dot”] Omishore and his best friend from Cleveland.

The night before the photo shoot Cudi requested an authentic Native American headdress—not an article of clothing most rappers would even try to pull off. But then again, how many rappers would dare try to pull off a rock album? With no risk comes no reward. Here’s the story of WZRD.