Drake Dances In His New Video For "Hotline Bling" For some seriously silly cha-cha moves set to a low-key breakup anthem, give Drake a call.

The Toronto rapper dropped the music video Monday night for his smash hit "Hotline Bling," which has him bobbing, thrusting and prancing around a room in what fans have called a corny pseudo-salsa.

The video, which debuted on Apple Music, opens with a shot of phone-sex operators monotonously entertaining clients before introducing Drake's soulful shimmying, which is interspersed with silhouetted shots of busty women.

Shot on a sparse, futuristic-looking set, the Director X-directed video bathes the rapper in soft, color-changing light as he belts out his hit, which is an angst-ridden letter to an ex-lover.

The musician's use of light and space in the video may have been inspired by visual artist James Turrell, whose exhibition Drake visited last year, Billboard speculates.

Drake's moves aren't all cheesy — toward the end of the video, he gets hot and heavy with a woman who bears an uncanny resemblance to his rumored girlfriend, tennis star Serena Williams. The mysterious dancer is reportedly choreographer Tanisha Scott, according to CapitalXtra.com. 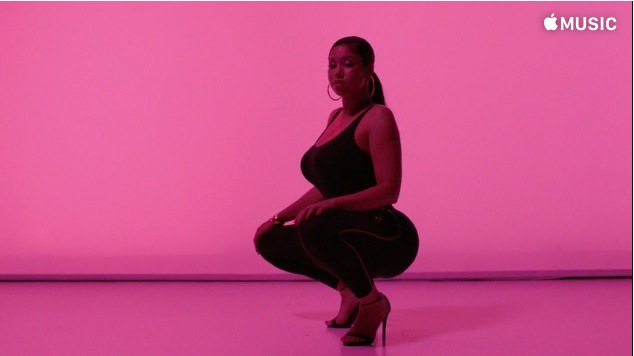 Many have called "Hotline Bling" a remix of Virginia rapper D.R.A.M.'s song "Cha Cha" — to the extent that in the midst of Drake's video release Monday night, D.R.A.M. tweeted, "I feel I got jacked for my record."

Drake's track sits at No. 2 on the Billboard Top 100, sandwiched in between Justin Bieber's "What Do You Mean?" and The Weeknd's "The Hills." The singer recently said that "no accolades really matter" to him besides his track hitting No. 1.

"If I get my first number one during the month of October it will be the biggest moment of my career to date (in my mind)," he wrote on Instagram.