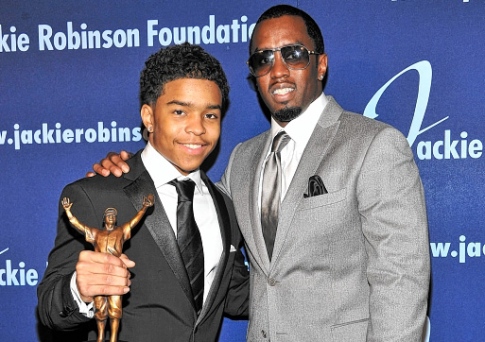 UCLA football is getting some star power.

Cornerback Justin Combs — also known as son of rap impresario Sean “P. Diddy” Combs — has committed to the Bruins, the rapper confirmed on his Twitter account.

Diddy released a statement saying it was “one of the proudest moments” of his life.

“This is everything a father could want in his son, for him to excel at what he loves to do,” he said.

The news of Justin Combs’ commitment was a bright spot for the Bruins, who fired fourth-year coach Rick Neuheisel Monday after last weekend’s devastating 50-0 loss to USC.

Combs, who has been featured on MTV's "My Super Sweet 16,” isn't the first rap star protégé to play college sports. Rapper Master P's son, Percy "Lil Romeo" Miller earned a full scholarship to USC in 2008 — though many experts believe that he was signed as a so-called package deal with his close friend and prep standout DeMar Derozan.

Derozan was drafted 9th overall by the Toronto Raptors in 2009 following his freshman season while the 5-11 Miller appeared in just six games for the Trojans and is no longer on the team.

Combs has played on both offense and defense for Iona Prep in New Rochelle, N.Y., this year and has a two out of four-star rating on Scout.com.

He told the recruiting website he's not worried about the flux in coaching at UCLA, but just wants to prove himself as someone other than a rap star's son.

"Most people think that he being my father, he helped get me the offers, but that's not true at all," said Combs. "I went out the whole summer, I went to all the 7 on 7s, all the college camps and I competed my butt off. I made the most of the opportunity. I did this myself. No one did this but me."

ESPN.com's recruiting analysis ranks Combs as a three out of five star cornerback.

"Combs is a very quick, disciplined and reactive defender against the run and pass," ESPN's scouting report says. "Has minimal size and very good athleticism for the corner position at the major level of competition; a growth spurt with added body mass would be beneficial provided foot quickness and playing speed are not compromised."

Scout.com reported that Combs' commitment could also help UCLA secure the signature of his close friend, Deaysean Rippy, who is a four-star linebacker at Sto-Rox HS in McKees Rocks, Pa.