The Diana Ross pregnant 2015 rumors began running as they do on Twitter after a photo surfaced of Ross sporting what could be interpreted as a baby bump.

Could be interpreted as a baby bump. But, really?

Again, Ross is 71-years-old (though a woman from India named Rajo Devi Lohan conceived at the age of 70, according to reports.). A site that debunks social and Internet rumors jumped out quickly on Diana Ross pregnant rumors and says, "Diana Ross is NOT pregnant" despite Twitter user implications.

"An Instagram user posted a photo on Wednesday of Ross walking down a street in Los Angeles, and people on Twitter immediately began to comment about the legendary singer and what they believed to be a baby bump. Despite the pregnancy theories, Ross is not with child, but rather just a victim of an unflattering photo that accentuates her weight gain," reported Gossipcop.com.

Ross was apparently photographed in Las Vegas, making a run with an assistant to the grocery store.

"The Motown hitmaker was dressed all in black, wearing a cardigan over a t-shirt and leggings.

She had a pair of black flats on her feet and carried her cell phone and wallet in her hand as she walked to her car," reports The Daily Mail. "The I'm Coming Out performer drove herself to the market for her solo shopping outing. " 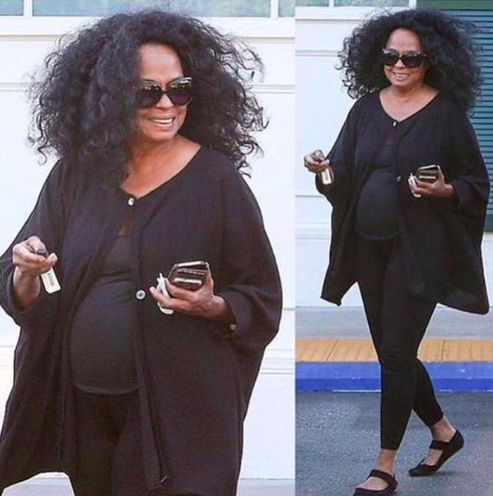